Despite having found early success as rookies, one popular idol group was revealed to be victims of abuse and constant punishments from their agency.

There have been reports that Pledis Entertainment staff members are constantly abusing members of male group SEVENTEEN both physically and mentally by both hitting and cursing at the members. Members have been seen being yelled at by staff even in front of their fans, and there have even been reports about fan gifts being taken away from them. A recent photo of several members of the group facing physical punishment has gone viral on Pann, where many netizens left their opinions on Pledis Entertainment and their treatment of SEVENTEEN. 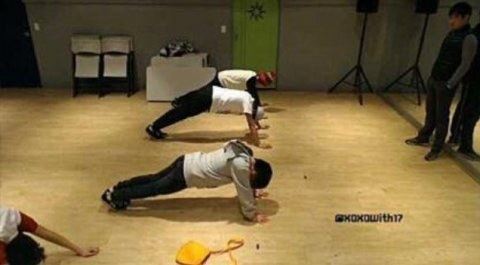 This video has also been a big issue where during his trainee days.

“Wonwoo was filming a short clip. During his introduction, his speech had a slight accent and one of the staff who were filming said ‘What did we say we do when you speak in dialect? We’ll see you after this’ The way Wonwoo was flustered shows how frequently they scolded the boys..”

[+ 205, – 8] Why on Earth are they getting punished…and they thought it was cool to release even? It’s a miracle the boys are so happy and smiley still after this