After missing multiple group events for his own solo activities, many fans are criticizing EXO‘s Lay.

Although it was originally about his poor acting skills, an article on Pann about Lay has received a lot of attention online recently. Rather than focus on the post’s original topic, many netizens have responded to the post referring to Lay as a member of EXO, noting that he shouldn’t even be considered a member of the SM Entertainment group anymore because of his absence.

[+ 379, – 51] He prioritizes his solo career over EXO so I don’t even want to call him a member anymore ㅋㅋ It’s not like he’s the only one filming a movie the other 2 are present as ever even during shooting I don’t even know why he’s acting so special 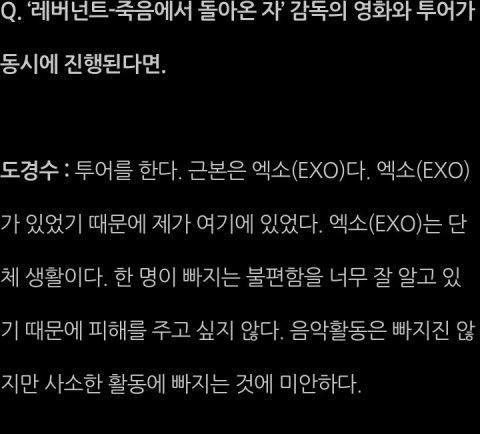 Q: If the director of “Revenant” casted you but it overlaps with EXO’s tour?

D.O: Tour comes first. My roots are with EXO. I am here because of EXO and EXO is a unit. We all know how hard it is to have someone absent and I don’t want to burden the members. I don’t miss out on music activities but I am sorry when I miss other activities.