On Korean broadcast, any scene including smoking is prohibited from airing for the reason that it may encourage acts of smoking among the youth.

However, the staff of Running Man made the mistake of airing a scene where Ji Suk Jin is seen smoking an e-cigarette behind the members during one of the games. 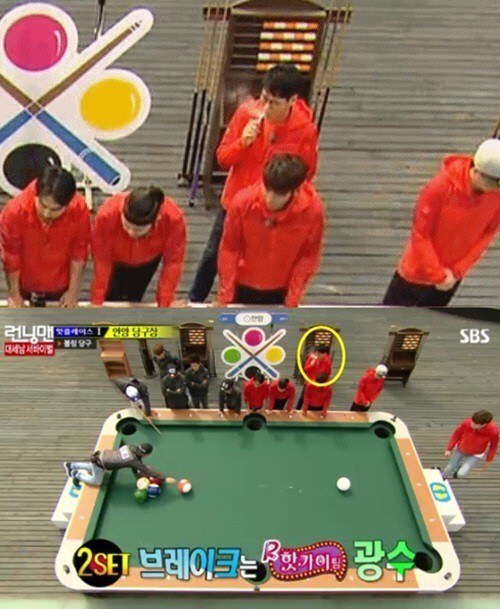 After the episode aired, many viewers complained that such scenes should not be allowed to air and criticized the staff and Ji Suk Jin.

The producers of the show apologized stating, “This is a mistake on the production side and we missed the scene because it was such a short scene that passed by so fast.”

Althugh the netizens that pointed it out were upset that this occured, others have expressed their disbelief in the fact that this is even an issue in this day and age.

[+ 8167, – 568] Korea’s probably the only country that is absurd enough to pixelate cigarettes in smoking scenes

[+ 7433, – 316] Lim Wonhee said on Real Men that he thought e-cigs don’t really apply as cigarettes so let’s just let this slide, it’s not like he committed a crime.

[+ 6659, – 268] I don’t really get what Ji Suk Jin or the staff did wrong. It’s a mistake, what’s getting on everyone’s nerves? Did they blow the smoke on you or bother you with its smell? ㅋ if you watch gangster flicks you’d all probably get lung cancer then ㅋ

Aespa’s NingNing Gives Fans A Glimpse Of Her New Tattoo At Japan Showcase, And The Design Is Definitely On Brand For Her