The debut of YG Entertainment‘s rookie male group iKON is undoubtedly a success!

Releasing their “warm-up” and debut single “My Type” as scheduled on September 15th, iKON has since then climbed up various online music charts for an all-kill status, remaining steady atop of various real-time and daily charts well until now.

Additionally, the music video has reached over 4.3 million views in a span of five days proving even more so just how highly anticipated their debut was.

Haven’t watched their debut music video or want another listen? Watch it below after the chart! 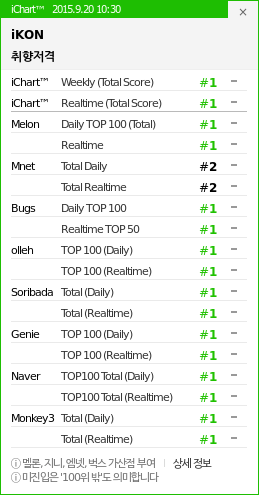