A post on a popular discussion forum has gained traction after compiling photos that show another side of T-ara’s bullying scandal.

In 2012, rumors erupted that the members of T-ara had bullied Hwayoung, resulting in much discord and the eventual departure of Hwayoung from the girl group. However, a recent post on a popular forum seems to show that the rumors are false and that Hwayoung was not bullied.

The post revisited an image of Hwayoung walking through the airport with the support of two men after she was reported to have sustained a leg injury. Yet, the poster revealed that prior to this photo being taken, the artist was walking normally without the support of these two men; it was not until after she reached the van outside the airport that she needed assitance. 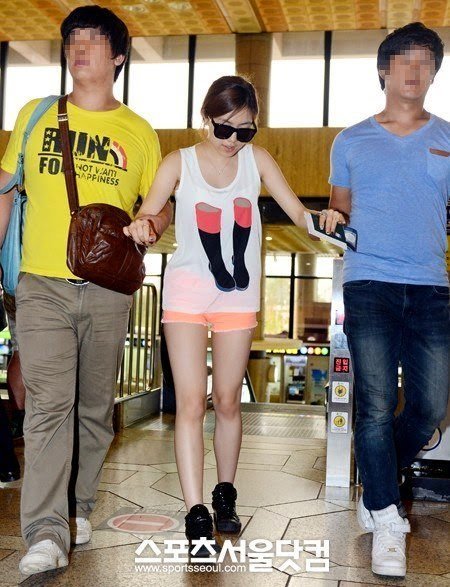 Next, while the T-ara members headed straight to rehearsal upon arrival in Japan for their big concert, the poster continued, Hwayoung said her leg was hurting and would rest at the hotel instead. But instead, she was found at the nail art studio. In light of this, the practicing T-ara members took to Twitter to speak out about determination.

The poster then compared Hwayoung’s injury to Jiyeon’s history of injuries, showing the two as contrasts:

►As a group, from 2009-2012 T-ara averaged two or three hours of sleep per night to complete all their schedules, treasuring even 30 minutes of travel time to rest.

►On January 1st, 2012, Jiyeon fainted on the stage of Inkigayo after the group’s “Cry Cry” stage due to exhaustion from recording for Gayo Daejun.

►In 2012, a backup dancer accidentally broke Jiyeon’s nose. However, she kept performing until the concert was over and did not receive treatment until afterward. She then flew back to Korea for Music Bank filming and another event, only to return to Japan to finish the tour. After returning to Korea, Jiyeon only took a day off for surgery before going back to the hectic promotional schedules.

►On October 10th, 2013, Jiyeon was diagnosed wth synovitis after her knee began to hurt during M!Countdown pre-recording. The condition meant that water was filling the inside of her kneecap – walking and moving was painful. Despite this pain, Jiyeon rushed straight to the M!Countdown live broadcast a mere two hours after receiving a shot. This continued for two months of schedule running.

►In 2014, Jiyeon was rushed to the emergency room for enteritis and acute indigestion while in the waiting room for Music Core. She was discharged the next day and apologized for not being able to perform that day.

Furthermore, the original poster compiled various quotes and incidents from industry personnel. One representative shared, “Hwayoung started getting a celebrity disease after she settled in with the group. She was cocky about being a celebrity and a T-ara member… the original members weren’t like that. I wondered why a new member would be acting like that… and I think she wasn’t bullied but the other members just reprimanded that type of behavior and the scandal blew up into what it is right now.”

Then, the poster tackled the story of Hwayoung throwing her crutches and refusing to perform on Music Bank. On the industry side, journalists and Music Bank PDs seemed to confirm the story. In addition, a well-known Hyomin fansite revealed that Hwayoung threw her crutches on July 30th, 2012 at 1:49pm while the agency CCM confirmed it the same day at 2:38pm. It seems then, as fans knew about the incident before the agency announced it, the story leans toward truth rather than simple media play.

Finally, the reactions and testaments of those who worked with T-ara such as managers and back-up dancers are consistent with the poster’s statement that Hwayoung was not bullied:

1. Make up artist: “Anyone who knows will know.”

2. Former manager: “Koreans are the best when it comes to making up stories. You can put away your needless sense of justice.”

3. Chief choreographer: “You cannot call something you did not experience for yourself the truth. Spreading distorted versions of what happened as the truth is close to crime… How upsetting. What did these young friends do to deserve this? They cannot say that they’re hurt even when they are, or that they’re struggling.. What is the truth? Is it that important to us living our lives…? How has our society changed to this extent…”

4. Main composer Ahn Young Min: “Netizens should tell their families that they love them in the time they’re writing these hateful comments.”

6. Former back-up dancers: “Scary how people can have this sheep mentality over something that they don’t even know the truth about.”

7. Other back-up dancers: “The world is so scary… You’re all going to be punished for making all of this up. It’s not the truth, so stop!!”

8. Hwayoung’s close unni: “I’ll say this for the last time. From what I know, regarding kids fighting over whether Hwayoung was bullied or not, I think it is the netizens who made Hwayoung out to be the victim of bullying. To what extent is the question… There are things about the celebrity industry that non-stars will never understand….”

9. Actor Ahn Jae Min’s interview (friends with Eunjung in school): Wrote a lengthy Twitter post testifying to Eunjung not being a bully and supporting her. Eunjung then got in contact with him and asked why he did that for her when he didn’t have to.

10. Suzy’s interview: Talked about Jiyeon taking care of everyone around her and putting them before herself.

Netizens have reacted with agreement toward the situation:

3. [+284, -81] In the IAC case too when Hwayoung was talking to Sungjong, T-ara was playing table tennis. The umbrella being broken happened before that and T-ara tried to put it over together. Hwayoung deserved to be bullied.

4. [+172, -14] T-ara would’ve been such a successful group Hwayoung never joined them. All because of one wrong member, the entire group hit rock bottom and all of them lost their dreams

5. [+171, -14] Posts like this have been coming up for several years now. People tried to clarify what happened but nobody wanted to listen. I’ll be grateful if people took off their bias for a second and read through this.

7. [+138, -8] All she had to do was sit on a chair and sing her part but she left because her leg hurt fully knowing that T-ara had been waiting for this important, first concert for so long. And then she went to a nail salon? BEAST’s Kikwang hurt his leg but he sat on stage on a chair and completed all of his performances. What a comparison.

9. [+115, -13] So glad that people are slowly starting to realize that Hwayoung was not bullied ㅠㅠㅠㅠㅠㅠㅠㅠㅠㅠㅠㅠ

Twitter Refers To BTS’s RM As “ARMY’s Father,” But We Know What They Really Mean