Former T-ara member Hwayoung recently appeared on confessional show, ‘Taxi‘ to talk about T-ara. Now, a former staff member is claiming that she’s lying and a former T-ara manager has confirmed the post.

In the latest episode of Taxi, Hwayoung appeared and briefly talked about the alleged bullying that occurred within T-ara members. This was one of the biggest controversies to hit a girl group in K-Pop and effectively ruined the group’s reputation within Korea.

At the time the rumors came out, T-ara was enjoying massive success and was considered one of the top girl groups. Immediately afterward, the public shunned T-ara and they’ve yet to recover from the blowback in Korea. The group continues to have loyal fans in Japan, China and Internationally.

Hwayoung appeared on the program with her twin sister, Hyoyoung, who was a member of now disbanded group 5dolls.

It’s disappointing. When I think about [T-ara] now, it’s something that could easily happen in a group of women. I only worked as a singer and I didn’t know how to behave in everyday life. I cried a lot and shut myself up in my room. I ended up losing a lot of weight [because of the incident].

Hyoyoung also spoke out on the show, talking about how affected Hwayoung was during the incident.

“My younger sister Hwayoung would turn on the TV to watch Music Shows endlessly with no emotion at all. She would just stare at the TV soulessly. I was still an idol back then and looking at her [Hwayoung] situation made me want to work harder.”

However, a former staff member is now claiming that Hwayoung and Hyoyoung are completely lying about the entire incident. They posted a tell-all message and leaked chat messages that reveal more to the story.

T-ara’s former Manager has also confirmed these posts to be absolutely true, according to media reports now emerging.

I watched the sisters crying [on Taxi]. Hwayoung said what happened 5 years ago was nothing special. It’s something that could happen easily amongst women? This isn’t something that should have happened.”

The staff member then went on to say that T-ara was not fully innocent either, but that the girls had far bigger issues. The post goes on to leak messages from Hyoyoung to Ahreum, who was the youngest member added to T-ara after the incident.

Below is a translation of the leaked chat messages:

Hyoyoung: Ahreum it’s Hyoyoung unnie.
Ahreum: Yes unnie hi^^!!
Hyoyoung: Ahrem you have to be thankful and say thank you when you’re being taken care of. If you don’t want to get beaten up act right. Word spreads fast in this field. Don’t mouth around and don’t act cheap ^^. I’m extremely angry right now so let’s not run into each other.
Hyoyoung: If I’ve misunderstood anything do you want to meet and talk? Or do you want to apologize now.
Ahreum: I don’t know what you’re talking about but I want to meet and talk. I’ve never done anything bad enough to deserve to hear such words. 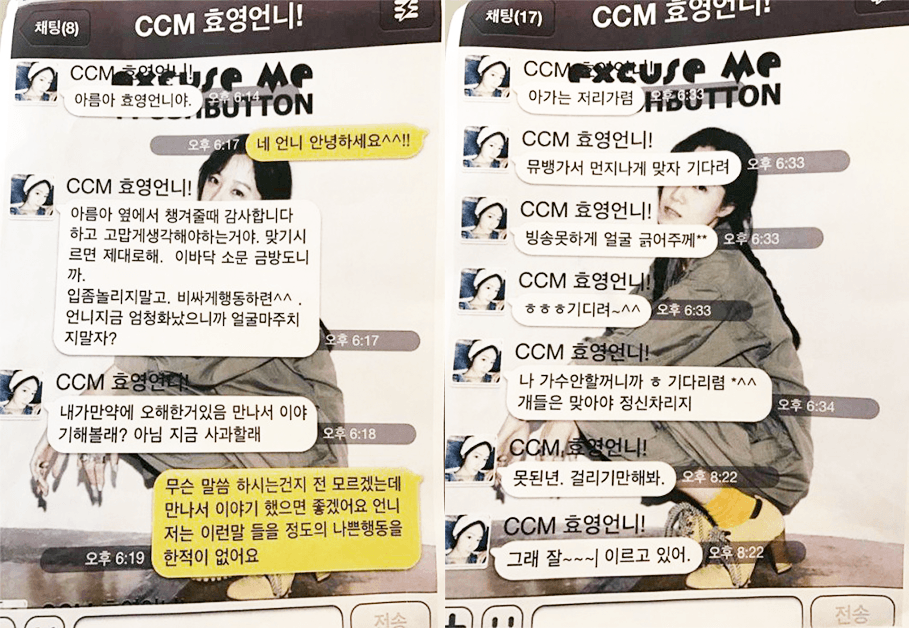 The staff member goes on to discuss Hwayoung’s leg injury from July 2012. The staff member confirms that while Hwayoung did fall, she was released from the hospital with her manager, after doctors said there were no serious issues.

However, after she returned home she went to another hospital and got herself a semi-cast. She would take the cast off when she was inside transport but would ask the manager to help her walk when reporters were around.

The staff reveals in the post, “I thought this was weird and I still don’t understand her actions.”

“I practiced so much to show everything I’ve worked for in these concerts, but it’s so unfortunate that I suffered an injury a few days before the concert. I apologize to my members for the injury because they had to change the choreography and stage placements because of me.”

The staff also discusses when T-ARA members left for Japan to rehearse for their Japanese concert. She claims that while Hwayoung didn’t participate using her leg injury as an excuse, Hwayoung also told staff she wanted to go out and get her nails done during the rehearsal time.

Hwayoung always demanded that she be allowed to take care of personal tasks and did not work hard at all.

MBN News reached out to a former T-ara Manager who confirmed the story and that the staff member is telling the truth.

“The post on online communities exposing what happened [with T-ara and Hwayoung] is true. The released KakaoTalk conversations are all real as well. All the staff members who worked [with T-ara] at the time know this to be true.

It seems that the T-ara saga is not yet over with these leaks showing a completely new side to the story that was not public in the past. Stay tuned for more on this developing story.