EXO-Ls collect evidence to reassure fans that D.O will always be a EXO member

Earlier, we reported that malicious rumors of D.O possibly being the next candidate to leave EXO. Many fans were confused and worried about another member potentially leaving the group to pursue his acting career. The original post included past EXO group events where D.O was missing due to his acting schedules and other accusations of witnessing EXO D.O drinking with his acting friends during EXO’s rehearsal.

However, persistent EXO-Ls collected evidences from D.O’s past interviews and press release to reassure worried fans that D.O will not leave EXO.

Here are the translations of D.O’s press release and interviews. 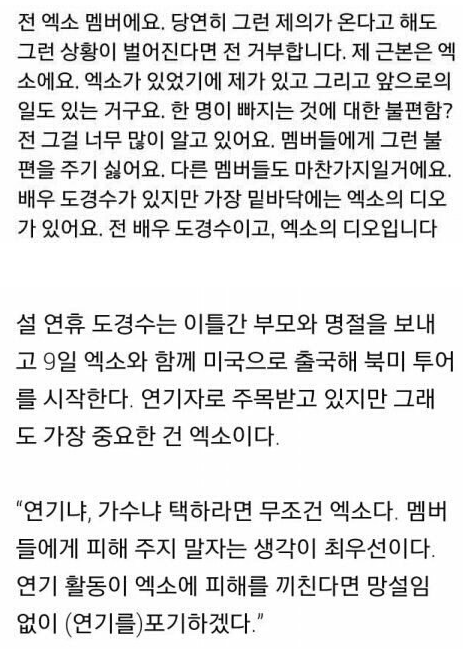 “I’m a member of EXO. I would reject any offers that would effect the group. I identify myself with EXO. EXO is the reason I am where I stand and where I will be in the future. A member missing at group event being an inconvenience? Yes, I know this for a fact. I really do not wish to make my members uncomfortable. I bet my members think the same as well. There is actor Do Kyungsoo in me but in the depth of my identity, there is also EXO D.O. I am both actor Do Kyunsoo and EXO D.O.”

Do Kyungsoo spent 2 days with his family during the Holidays and left to the U.S on the 9th with EXO for their North American tour. He is gaining a lot of attention as an actor but he prioritizes EXO before anything.

“I would choose EXO if I had to choose between EXO and my acting career. My first priority is to not negatively effect all of the members. If I was giving EXO inconveniences due to my acting career, I would give it up without hesitation.” 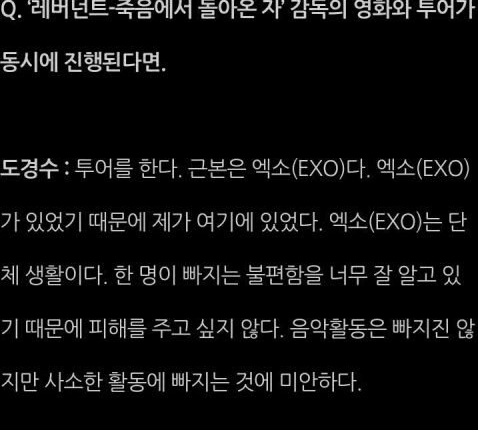 Question: “What would you do if the film ‘Revenant’ director’s movie shoot and EXO tour was happening at once?”

D.O: “I would choose the tour. I identify myself as a member of EXO. I am who I am because of EXO. EXO is one. I know the inconveniences of one member missing from the group so I don’t want to negatively effect the group. I know I never miss music activities but I am still sorry for sometimes not being able to be part of small activities.”